We have lived in our current home for three years.
The entire time my room has sat undecorated.
I decided it was high time
to get some personal sewing done! 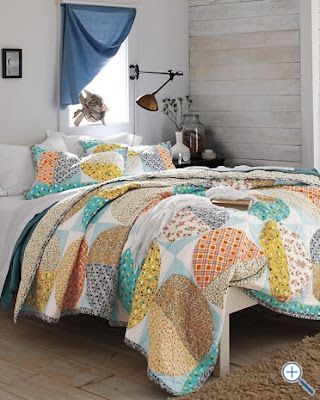 But it might have too much pattern for my small master bedroom.
Plus, it's sold out anyway.

So I'm busy at work making some
pillow shams that have a similar vibe. 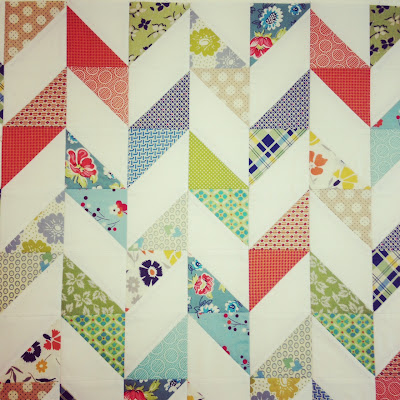 I also dig these Euro shams but I need them in a calmer color. 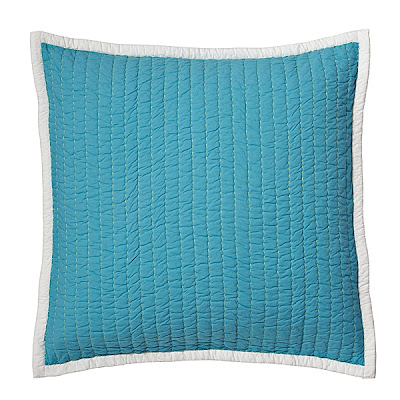 Oh hello!
It's been a while.
My little break was oh so nice but I'm ready to get back to work.
I finished the Matilda Jane Quilt I was working on about a month ago.
I gave it to my friend Katie who took the most amazing pictures of it.
Now it's living with the lovely girl
who once wore all of these clothes.
I'll let the pictures tell you more...... 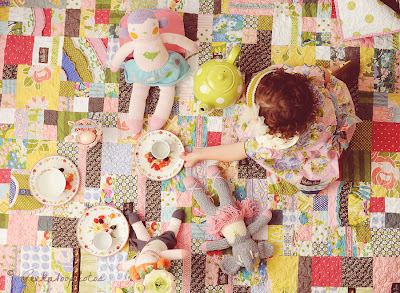 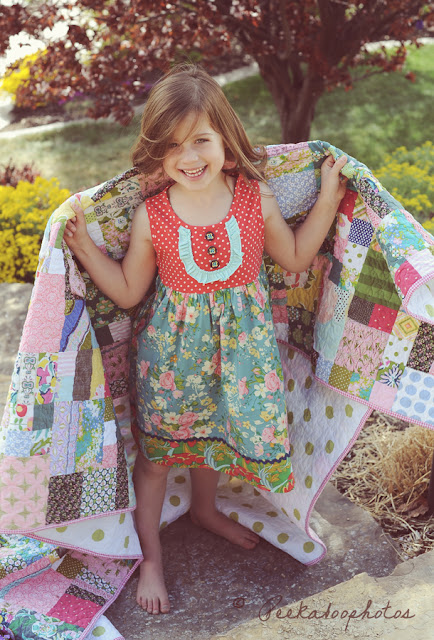 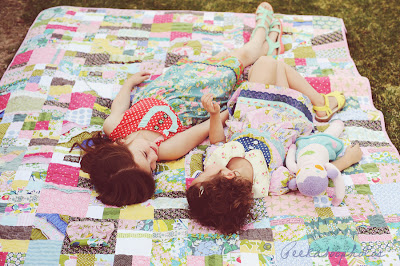 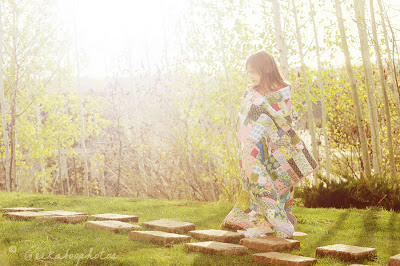 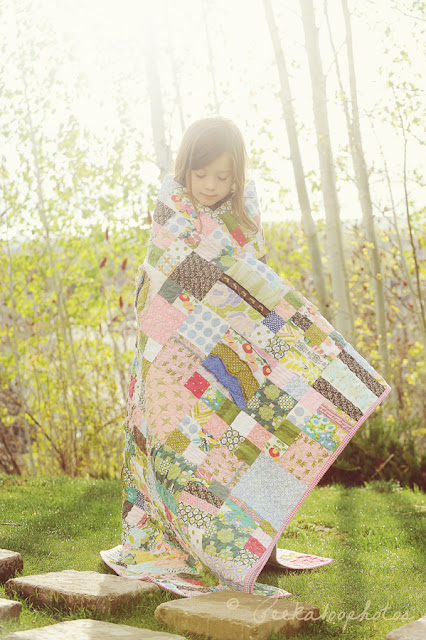 I'm telling you, if all of these clothes didn't
actually belong to someone else
I would have refused to ever sell it!
I am so proud of how this quilt turned out.
It just about did me in though!
In fact, it is the entire reason that I had to take a beat.
Sewing from old clothes is no small task.
If you're interested in the process just let me know in the comments.
Maybe I'll have to do a post on that.

Hi there!  I'm back!
Sorry I've been gone so long.  I do have good reason(s).
They're really quite boring though.
I'm sure you don't want to hear my blah blah blah's. 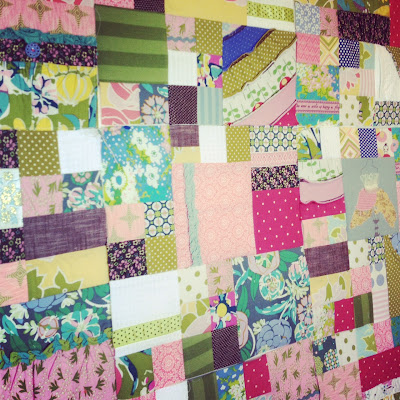 But it's fun.
I just need to take a lot of breaks, ha ha! 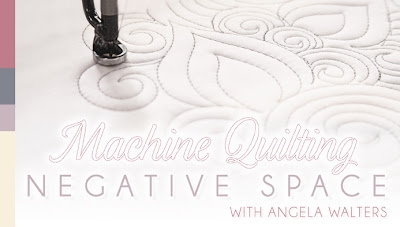 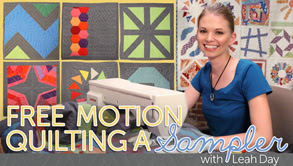 Craftsy is having a really great sale right now.
(I think it ends tonight)
I couldn't decide which one so I just enrolled in them both!

Well....I was super nervous about starting this quilt for a friend.
It's a lot of pressure when you're dealing with $1500 worth of Matilda Jane clothes!
So, I just closed my eyes and made the first cut. 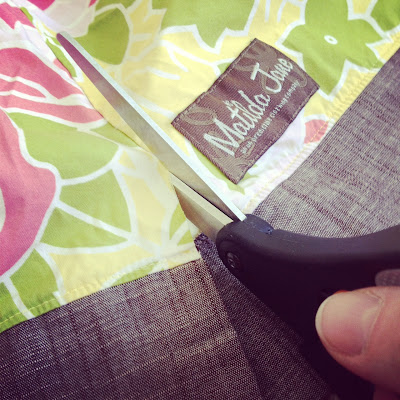 I cut all of the dresses so they lay flat.
Then I ironed some light weight fusible to the back side
so all of the tucks and gathers would stay in place.
Then I got to the real cutting! 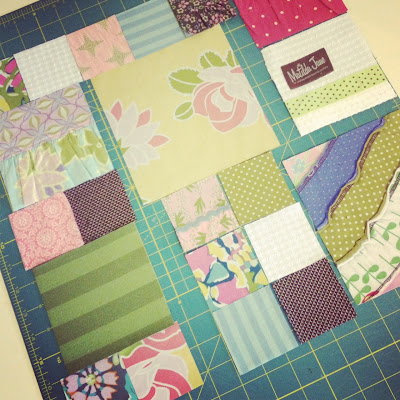 I used Magic Numbers for my piecing method.
I decided using multiple sized squares would be the best way to avoid tons of waste! 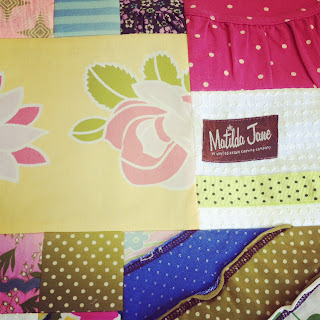 This quilt is for a friend of mine made from her only daughters old clothes.
So I really wanted it to be reminiscent of the actual outfits. 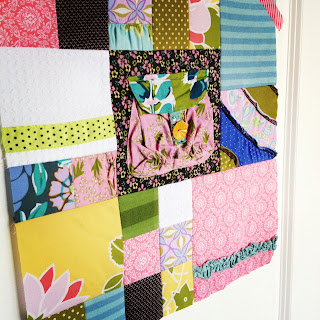 So I kept details like pockets, gathers, and ruffles.
I had to cut notches where seams were to bulky and didn't lay flat.
It should end up being twin sized.
And it might take me a loooong time to complete this baby!
But I'm having a ton of fun working on it!
Thanks for popping by!
Posted by LuLu at 6:39 AM 8 comments:

The best kind of busy!

I have been sewing!  I swear!
But I have also been sitting in the bleachers
being a crazy cheerleader Mom.
I totally embarrass my boys....I know this.
But guess what, I don't care :-) 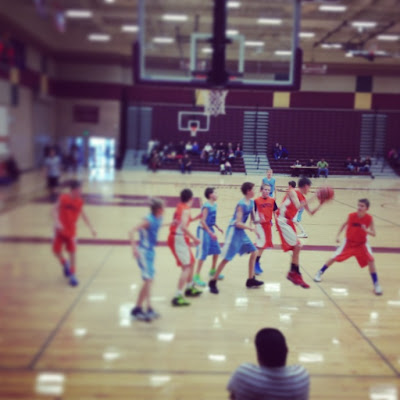 That's my numero dos being the rebound fool that he is

My two oldest boys have been in the playoff's for the last few weeks.
Game by game making their way toward the final. 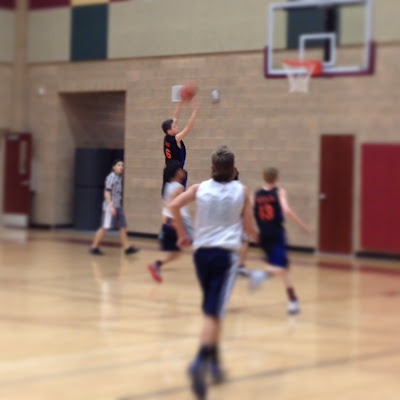 That's my oldest going up for the shot, dang I love basketball!

Both teams did very well!  One made it to the final four while
the other made it all the way to the championship game but lost.
Seasons over.....so sad!
Oh wait, spring season starts today.
It never ends!

Okay, thanks for indulging me!  I always geek out over basketball.
Back to matters...... 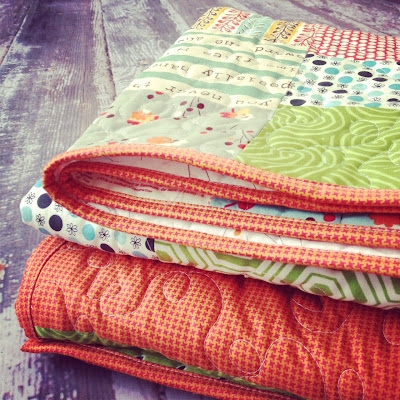 I finished this quilt for Art Mom with a Pearl Earring.
I love this quilt so much!
It has all of the best fabrics from my stash in it. 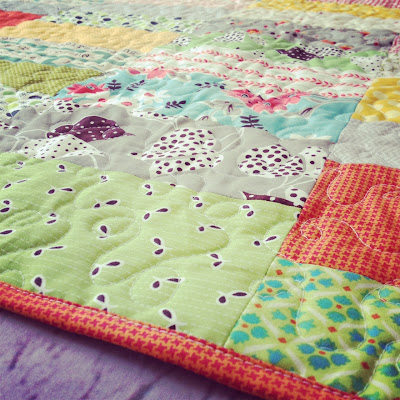 This time around I used Soft & Bright batting because she
wanted it to have some fluff.
I also quilted it with traditional loops and swirls.
Straight line stitching, sometimes, is too flat for my taste. 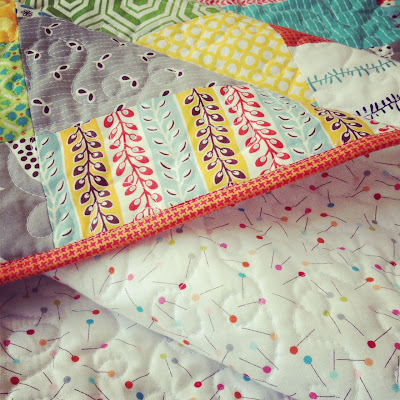 I just had to back it with these Sew Stitchy sewing pins because it's
not too often that I sew for a fellow quilter!
I knew she would love this print.

I can't lie....I might have watched a TV show or two
underneath this blanket before I handed it over.
It was fabulous!  I didn't want it to end.
I hope that she and her children fight over it :-)

Not a dish towel anymore!

My quilt top for Art Mom with a Pearl Earring is complete! 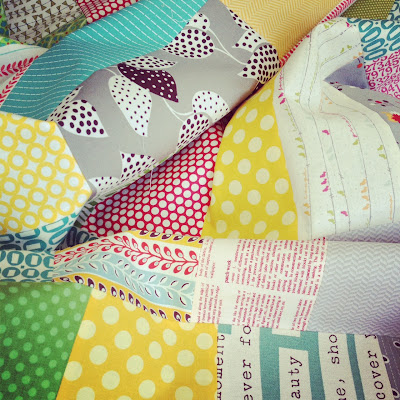 I love all of the variety in this quilt!
It is very fitting of my friend Diane who is whimsical in every way. 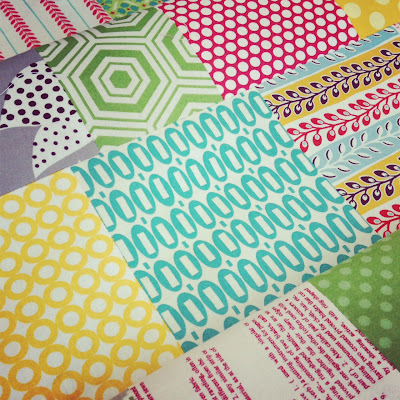 I had hoped that the backing would be here by now.
Oh well.
I suppose, while I wait, I will cut into this
small fortune of Matilda Jane Clothes.
I am making a keepsake quilt for my friend
out of all of her daughters old clothes. 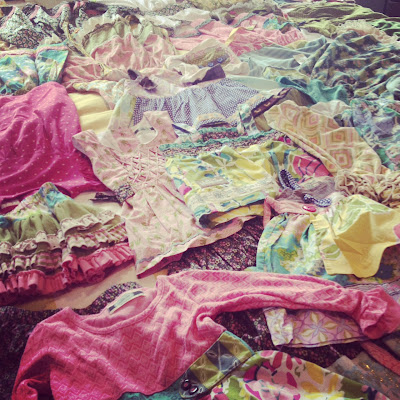 I have to admit that I'm terrified to cut into all of these pretties!
But I have really fun plans for them so
it's time for me to suck it up and start snipping and picking!
Wish me luck!
Posted by LuLu at 10:54 AM 10 comments:

It all started with an Anthropologie Dish Towel

This week I've been working on a quilt
for the lovely Art Mom With A Pearl Earring
She is a fabulous art teacher extraordinaire
that just moved into my neighborhood.

She offered a trade and I eagerly accepted!
Two of my kids will be so lucky to attend her
art sessions that go until May.  Supa fun! 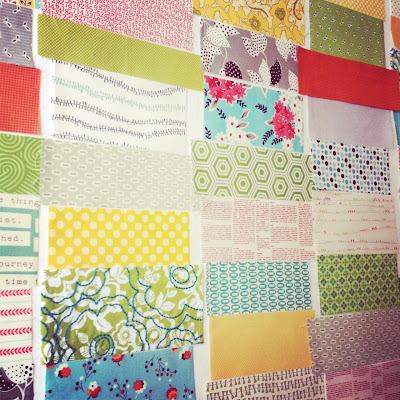 This quilt is going to have literally everything in it!
Well....not everything.
But I let her rummage through all of my stash and we started
with the green Anthro dish towel with turquoise embroidery on it.
I've been packing it around for the last 5 years
just waiting for the perfect opportunity to use it.

While piecing I have been listening to this book... 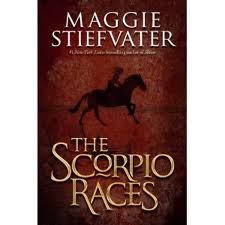 I have to rave about this audiobook!
The narration is phenomenal!
I just fell in love with this spitfire Irish girl.
For me, it was over too soon.

Today has been a very cold and snowy day
So we figured we would stay indoors and
work on Valentines Day boxes. 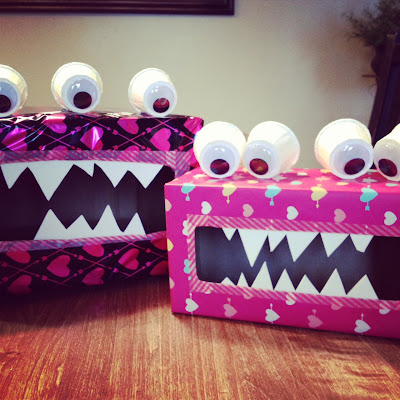 I let my kids comb through Pinterest looking for ideas.
This is what they came up with.
Kleenex boxes transformed!
The best part was that we already had everything we needed.
Win! Win!

LuLu
I am Mom to 5 fantastic kiddo's and wife to my man Brook. I'm obsessed with fabrics! I get really stir crazy if I can't create. This is me scratching the itch! 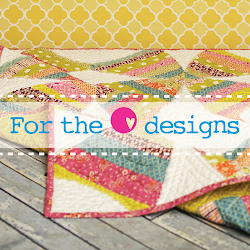 For The Love on Etsy

Please say a quick hello and make my day! Tell me what you're working on, or your latest inspiration. If you have any questions leave them in the comments section. I will respond there as well. Thanks for popping in!